As the name implies, this is where ships can be created and edited. 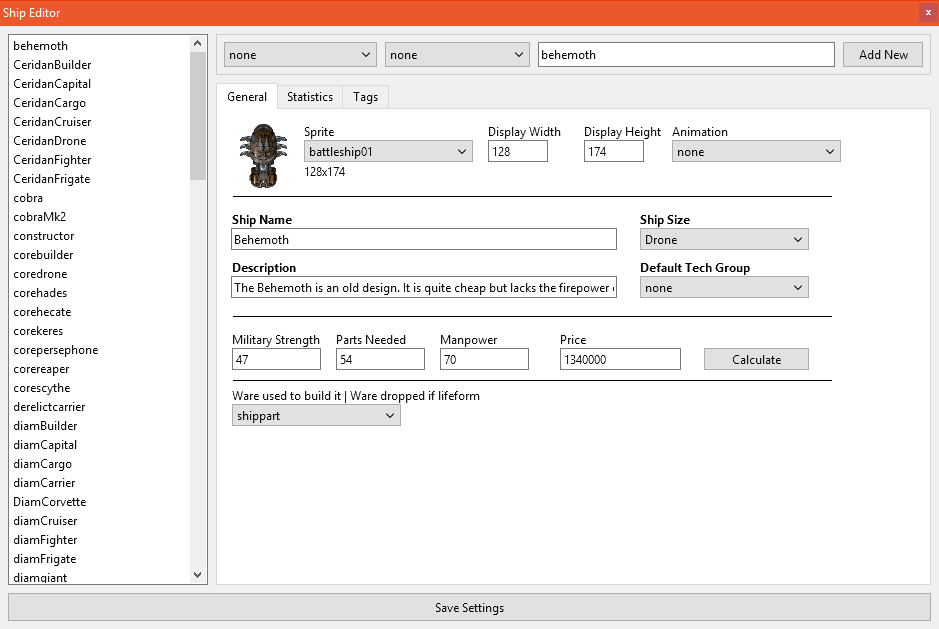 You can select a file name for the ship using the textbox in the top right of the window. The name itself is irrelevant, it's used internally by the engine and doesn't appear in-game. It must be unique and shorter than 64 characters. Don't use special characters or punctuation that you wouldn't usually see in a filename (e.g. “à , . é ? *”).

Once you're done choosing a name, press the Add New button to get a blank new template for your ship. Alternatively, you can use an existing ship as a template. To do so, select a ship in the drop down list in the top left and choose a new file name in the text box, but DO NOT press Add New in that case.

First and foremost, you'll want to choose a sprite for the new ship. The drop-down list will display all of the sprites available for selection. If you want to add your own sprites to the game, you'll have to put them in the following folder while the editor is closed:

Any sprites added must be in PNG format with a transparent background and must be facing north.

To finish adding the sprite, you need to specify the Display Width and Display Height - the dimensions you want your image to be displayed at when it is at a 1:1 zoom level. By default it's the size of the input file, but it can be handy to change those settings if the source image is bigger than you want it to be.

The Ship Name must be relatively short to fit into the windows correctly. It's limited to 64 characters, and can include special characters.

The Description is a longer description of the ship with, for example, its history and so on, and is limited to 255 characters.

The Ship Class is mostly self explanatory. It's still important to note that only fighters and transports can dock at carriers, that only constructors can build stations and that only carriers will use their docked ships to defend themselves.

You will also have to specify the Ware used to build it. All standard races use “ShipPart” to build ships apart from the Core who has its own custom ship part (“CoreShipPart”). Basically, the ShipPart is a ware produced by a factory that and is used to limit a faction's military production. If you are making a custom faction with it's own custom factories and production logic, this is something you may want to change.

The Default Faction combo box, set at the top next to the default ship size, is also a value you should consider changing. If set to “none”, any faction that can use third-party ships (pirates, humans, ISA, player) will be allowed to buy / build this kind of ship. If you set it to a particular faction, only the faction specified will be allowed to build it.

The Weapon Slots field controls the amount and size of weapons the ship can equip.

The Shield Slots statistic controls the amount and size of shields the ship can equip.

The Equipement Slots field is unused.

The Cargo Space value controls how much cargo the ship can hold.

The ship's Price is the price at which the ship can be bought by a faction when it's not producing it.

The Battery Energy attribute sets the maximum amount of energy the ship's battery can hold. Firing weapons and recharging the shield cost energy.

The Maximum Speed field is pretty self explanatory. A too high value (15+) may result in weird behaviors.

The Acceleration field controls how fast the ship is going.

The Turn Rate field controls how fast a ship can turn (in ° per second).

The Brakes control how quickly a ship slows down.

The Hangar bay size controls how many fighters this ship can hold in its hangars. In theory, any ship class can have hangar bays, but it has only been tested for carriers and constructors so far.

Just press the Save Settings button at the bottom.

Assuming you have a developer build of the game, there's a handy Cheat menu available for you. Launch the game normally, wait for the game to load, and then press the cheat button at the bottom of the top left toolbar to get this window: 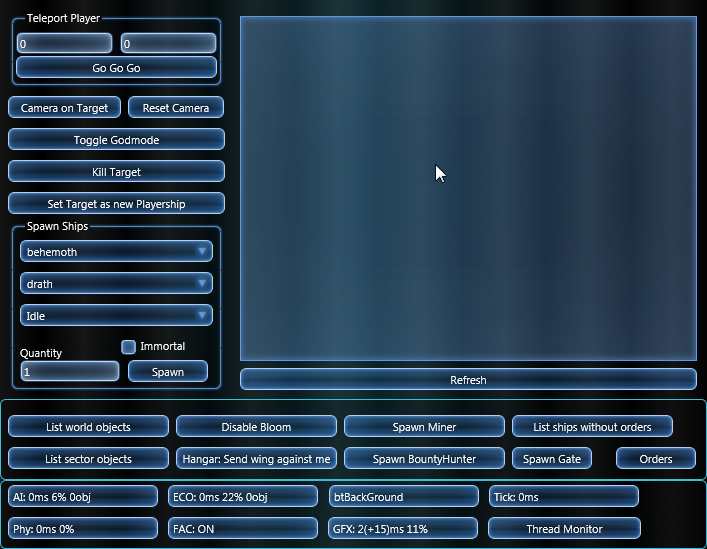 It's my internal debugging tools, and it's easy to crash the game from it. Anyway, you can notice a “Spawn Ship” box. Inside, select your ship (first box) by its filename, then select your faction (player), then to make things easier for you to locate it if you are in a busy sector, select the “protect me” order from the last box. Click spawn and close the window.

If everything goes well, a newly spawned ship should be heading to your position. If you want to fly it yourself, select it and press the “take over” shortcut key, which should be [E] by default.