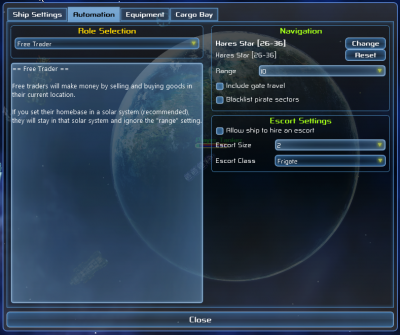 Free traders will buy low and sell high in a given solar system automatically. They do not always take the best deal available, but they can make an awful lot of money very fast nonetheless. They often are prime targets for pirate raiders.You can set any ship type as a free trader. Cargo ships tend to work best money wise, but nothing prevent you from using beefier ships to do the job. Endangered free traders, granted their jump-drive is ready will try to jump to safety when faced with certain doom, but it's still possible for it to be destroyed during jump preparations.

To set one of your ships as a free trader, open the ship’s setup menu and go to the automation tab. Select the “Free Trader” jobs. Then, select a new home-sector for it, uf you’ve not set an home-sector, it will automatically use its current sector.

If you set the home-sector outside of a solar system, it will use its other settings to determine where it is allowed to trade. For instance, if you allows it to use warp-gate and set its maximum range to 10, it will most likely cover all the galactic map. In that case, you're strongly advised to also restrict it from trading in pirate sectors in order to increase its survival rate.

Occasionally a trader will seem to have stopped working. It generally happens when there are no profitable deal in the zone you've allocated the trader to. Those situations tend to fix themselves after a few dozen minutes, but on rare occasions, you might want to move your ship to a more profitable area.