The Defense Grid system monitor every sector the player has a factory in for enemies. ADS Compatible stations will still send squadrons to defend their own sectors, but in addition, ships you have linked to the grid will jump to defend endangered sectors.

Ships linked to the defense grid will continue to do their business as usual when there’s no alert. If a sector is under attack, those located within the jump radius you have set in the General Settings will jump in to deal with the threat, jump back and resume previous order/patrol. Energy cells will be directly bought from player’s money account and beamed to the ships at increased cost (x2). Any player owned big ship can be linked to the Grid, this includes M6, M7, M2, M1, TM and TL ships.

You can setup the defense grid, monitor sectors, and toggle ship membership on/off through the Manager 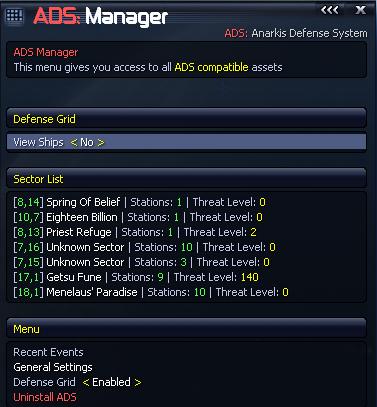 When a sector has a threat level higher than the one set in the General Settings, ships linked to grid will start jumping toward that sector. Notice that the Grid system doesn't send ships the second the sector is endangered and it won't send all its forces at the same time. It will try to send a “fleet strength” 3 times stronger than the threat level, after a while is there's still ships available in the grid, it will send another wave, and so on until the threat is dealt with.

If several sectors are endangered at the same time, the grid will react accordingly, granted you have enough forces. 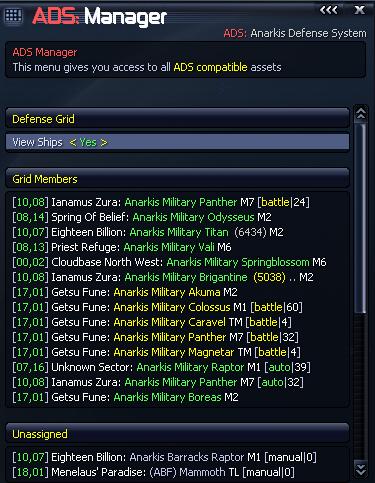 On that display, ships displayed in yellow are intercepting a threat at Getsu Fune. The Boreas isn't in Yellow because it was already guarding the location.