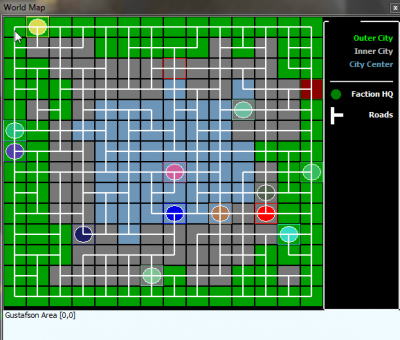 This is a screenshot of a large 14×14 city. For practical reasons, the city is divided in several districts (of 64×64 tiles). The districts all are linked by a road network and are divided in 3 large zones.

Those in the center (the blue ones) have a tendency of containing many Office Buildings and shops. Gray districts have a lot of small houses and some factories. This is considered to poor area in the city. The outer green ring of districts is the richer suburban area where you can find large parks and mansions. And last, but not least, the lone red district is belonging to the Military Faction. It's housing a large and highly defended base. Access to this base is restricted and trespassers are shot on sight.

The city is home of various factions, some of them are randomly generated, others are hard-coded. The location of the HQ of most factions are shown on the map by a circle. Faction HQ may be interesting buildings to visit as they may sell rare stuff or may be dungeons with loot.

Also, as a gang war is raging in the city, districts can be taken over by gangs or be liberated by the police. This is part of the faction warfare system. Sectors not belonging to the government have colored borders on the map, the color being the one used by the faction managing it.

You also have to know that the whole city is living. Each citizen, and there's thousands of them, has a house, a job and has basic needs like sleeping and eating to satisfy. Cops are fighting bad guys while blue and white collars are producing and selling goods. Factories produce items that will be distributed to shops through couriers. Thieves enter other people's houses to steal valuables. And so on.