Once you've installed Pirate Guild, the first thing you have to do is to go in your [Esc] / Gameplay / Artificial Life menu and enable the pirate guild item. It will allows you to setup this plugin the way you want. 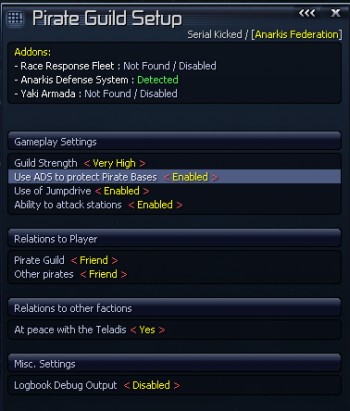 The first thing to do when enabling Pirate Guild is to setup it the way you want.

It's your choice from total war to friendship with the Guild and the other pirates. If you already have a good fleet / empire, and want to “kill those damn guild ships to get good reward money”, I'd suggest to give it a go with a Guild Strength set at “Very High”, enable ADS, jumpdrive and attack on station, and set relations to Foe (for fun ;)). Newcomers, and quiet traders who only want to see battles from far afar should keep medium setting, with the pirates as your friends.

Played as a pirate, the most interesting settings may be to start neutral to the guild and friendly to the other pirates. ADS should be enabled as it triggers some news and missions in addition to the defense of the bases.

Debug Mode In debug mode you see a real time news-feed of what the Pirate Guild is doing. It also adds various cheat options in some ECS Dialogs. Everything the plugin does is also copied to a logfile (path: My Documents\Egosoft\X3TC\log08513.txt).

To replace the non modifiable communication system in X3, I have included an alternative system to communicate with pirate ships and stations through a hot-key. Once you've installed Pirate Guild for the first time, go to [controls] / [extensions], scroll down to [interface] and set a key for the ECS: Extended Comm. System command. This done, find a Pirate Base, target it and press the key to comm with it (at less than 25km). 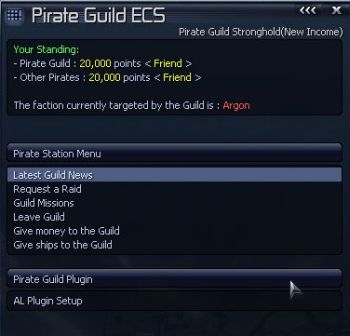 This nice menu allows you to access to the Pirate News Network, ask for a raid (if you notoriety is high enough), pay your fine to turn back blue a pirate base, see your notoriety, and give things to the Guild. How the pilot/station will react depends on your rank and your overall reputation with the pirate faction. The basic communication options allow you to ask a ship for the location of the nearest pirate base, to ask for an escort, to surrender, and more. You're also able to help a pilot when he is attacked by the police or military forces. The ECS system is very important and it is used for all interactions between the player and the plugin, so you'd better get used to it ;)

Your notoriety to the pirate guild and the other pirates can both be between -1.000.000 and 1.000.000 points. And you will be considered as Foe, Neutral or Friend to them as follows:

If you're under -10K, most pirate ships will spawn red. Between -10K and +10K it seems that they will spawn both blue and red. And over +10K they will mostly spawn blue. Some pirate ships will still spawn or turn red on you no matter what your notoriety is. Also,understand that ships won't magically change their attitude toward you as soon as you change your notoriety, it takes time.

This said, the plugin allows you to set your relationship with both the Pirate Guild and the other pirates (those spawned by the game engine).

The Pirate Guild works on a separate level (like the corporations in X3TC). It has its own notoriety system between -1M and +1M. And this notoriety system is used to manage PG ships and all Pirate Bases (anarchy port, and factories are not concerned). Meaning that if you set the Guild as a Foe, all pirate bases will turn red on you and same goes for PG ships. Helping Guild ships, giving money or ships to pirate bases will increase your notoriety, attacking them will (of course) decrease it. Attacking non aligned won't affect your standing toward the guild. According to your standing toward the Guild, expect the following:

A race can also be selected as the worst foe of the Pirate Guild, including the player. The Guild automatically targets the race who dealt the most damages to guild's assets. And when you fall in this category expect the following: