Factions in Unending Galaxy have dynamic relationships determined in a similar way to Civilization games. There's a set of fixed parameters that determine how much they like each other initially, those mainly depends on their laws, values, aggressiveness and diplomatic skills. Additionally, there's another set of parameters, playing a larger role, that evolve during then game. For instance, if a faction would like to takeover a sector owned by another, their relation will deteriorate, or, if ships of one factions gets destroyed by ships from another it will do the same. On the other hand, time spent at peace between two factions will improve their relations. In total there is about 20 of such parameters.

Also, in addition to these parameters, each faction has a set of traits (aggressiveness, xenophobia, trader, diplomat, stubbornness,…) that has an effect on their behaviors, for instance the isolationist Draths are harder to befriend than the humans.

Diplomacy, for the player, is mostly relevant when playing at the Empire stage. Factions won't be that much interested in you unless you own a few sectors. 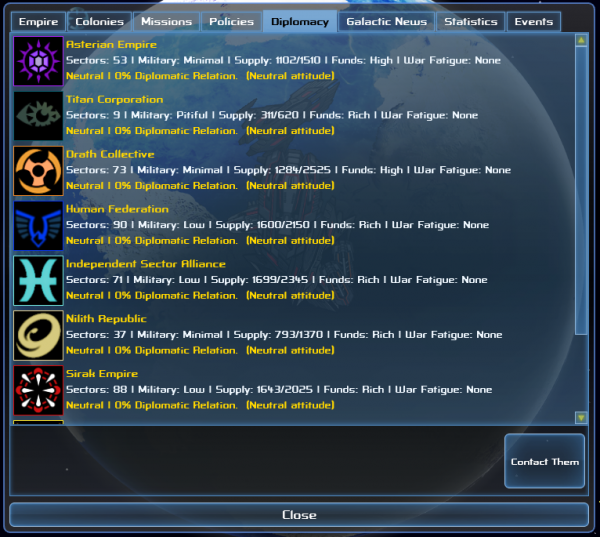 The faction list can be accessed from the Empire Manager (F1, top first button in the menu). For each faction you can see how much they like you in percentage ranging from -100% to +100%, their money, an estimate of their military strength and how many sectors they controls. Clicking a faction will also display a short bio in the bottom panel. Double clicking will lead you to the diplomatic menu itself.

Note that it is not possible to communicate with the AI Core. They are always hostile to everyone else. 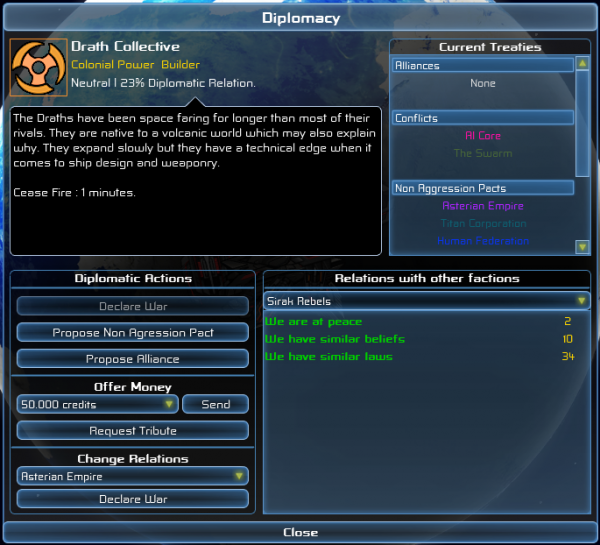 This is where you can make your diplomatic moves. The list on the right details why the target faction likes or dislike you. It's possible, using the dropdown box on top of that list, to look at their relations with other factions from here too. On the left is the dialog box from the faction you're talking too.

And at the bottom are your possible diplomatic actions. Before explaining the various options, it's important to know the main particularity of this diplomatic system. The player doesn't have the ability to set his demands. For instance, If you request an enemy you’ve beaten to make peace, it will offer what it considers to be fair (can be credits or a system so far). You’re free to discard his offer, and it will probably improve as you are razing more of his territory, but you can’t set the price yourself. Same goes if you request a tribute, ask him to join in a war, and so on.

It doesn't really make so much of a difference with usual trading table you’d find in other games. Usually the AI won’t go over a given threshold when dealing with you, and you will not stop tweaking the trade agreement until you reach it. We just cut the negotiation part, especially as UG doesn’t have techs to trade. Money and sectors are the relevant resources here. More importantly, it makes exploiting the diplomacy much more difficult.

Your first option is to declare war. This is straightforward, clicking this button will make your two factions hostiles to each other. It is important to note that wars can't be interrupted for a fixed period of time (20 minutes in the current version), none of the two factions will be able to make peace during that period.

When two factions are at war, all their respective ships will consider each other hostile and civilian trading between the two will cease. If they have common borders, it is likely that invasion fleets will be launched to invade this territory.

If you have automated your defensive ships, they will position themselves around the border automatically. Consult the part about wars in the documentation for more details.

If you are already at war with someone, the first button is used to make peace. If the war lasted for long enough and that your are winning it's likely that the other faction will initiate this action by itself. Depending on how the war is going, which take into account your respective military might, the war wariness of both of you and the sectors lost and gained there's 4 possible outcomes.

In any case, if peace is settled, there's a cease fire agreement being signed that will prevent any of you to declare war on each other for 15 minutes in the current version.

For a faction to accept an alliance, you'll need to have very good relations (above 70%, varying from faction to faction). Some factions like stronger allies, others prefer weaker ones. The whole decision process is fairly complicated, but it's efficient.

When allied with a faction, it will join you in a war if you are attacked by a third party. It also makes other factions less likely to attack either of you as they’ll take both of you in their calculations (granted you both have common borders with the enemy). Police and military ships of your ally may also help you to some extend. Once fog of war is implemented, you’ll also get full view of their territory.

Alliances last for 20 minutes before any party can cancel the treaty. Once the treaty is broken, you won't be able to declare war on each other for another 15 minutes (it counts as a cease fire agreement).

In the future, the alliance treaty will be improved upon to allow AI military fleets to help you out even if they don't have direct borders with your enemy and to make it cheaper to ask your ally to declare war on another faction.

A straightforward method to exchange money for better relations. It's a good method if you want to delay a declaration of war by an hostile faction that want parts of your territory, as it's not possible for a faction to declare war on you if your relation is above 10% or so.

This is where you can ask a faction to make peace or declare war on a 3rd party. Depending on your relation, their relation with the 3rd party, how busy they already are and their relative military strength, they may accept to do that for free or request money. Also, if you are asking them to declare war they may request you to join in the fight if you're not already are.

Here is the list of all the diplomatic modifiers used to determine how much faction like/hate each other: