The Empire Manager allows you to manage your empire, conduct diplomacy, read the galactic news and to keep in touch with what happened recently. This also where you can keep track of your assets and of the missions you have accepted. 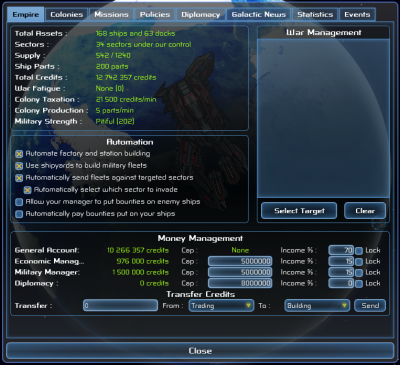 This first tab is where you can review and alter the general settings about your faction. It has multiple areas.

This part is fairly straightforward. It displays relevant statistics about your empire: Military strength, money, ship parts, sector held, number of ship and so on. The only part needing more explanation here is the war weariness which is explained in the part of this documentation about wars.

If you play as an empire, you can also toggle on and off the following managers

If you keep everything automated, your empire will basically run itself automatically without your input. The only part you still fully control is the diplomacy.

This small panel is used to select the sectors you want to invade. To invade you must be at war with its owner and have a border in common. Notice that this menu works also when your military manager is enabled, and as such can be used to give orders to your automated military fleet.

This is where you handle your money. We use separate accounts to make sure the AI (and by extension your managers) is able to spend credits efficiently.

You can set an upper limit for each account, and set what percentage of your income will go into each one of them. You can also move money around freely between accounts. 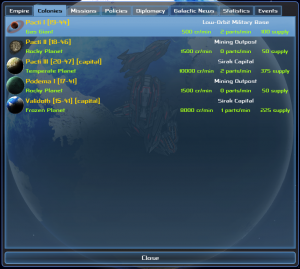 From this tab you can see all the colonies under your control alongside relevant stats. Double click a colony to open the colony manager.

Once you've conquered a couple locations, you may want to review this menu. It allows you to set various policies for your faction, including who can enter your territory or use your warpgates. 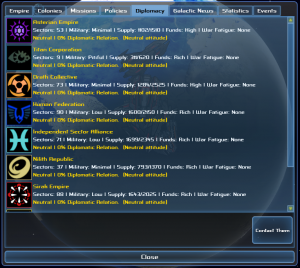 This is the diplomacy screen, it list all the different factions, their military strength and their attitude toward you. You can either use the 'contact' button or double click the list to contact a faction. Check the chapter about diplomacy for more information. 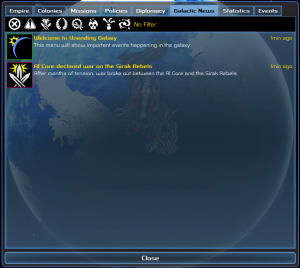 That's self explanatory. This page lists the major news in the galaxy: Declaration of war/peace, sectors changing hand and so on. It also log important events in relation with your faction. 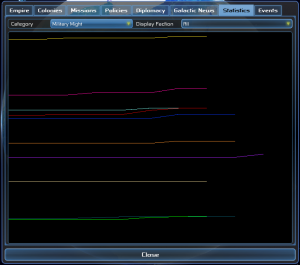 You can review the missions you have accepted here. Clicking a mission will set it as your current one which result in highlighting (with a red square) the mission's target(s). 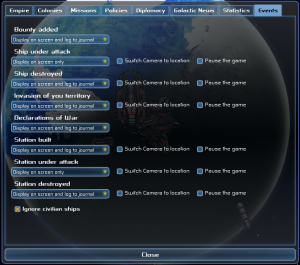 This tab allows you to set how events relevant to your empire / fleet / lone ship will be handled. For each type of event (ship killed, station built, and so on), you can log in your journal, on screen, both or none. And for some relevant ones you have the ability to center the camera on it, giving you a (slim) chance to save this poor transport choke-full of weapons from nasty pirate raiders.