Anarkis Gaming reserves the right to delete or ban any content we deem abusive on the Steam Workshop. This includes, but is not limited to, nudity, profanity, materials that infringe on copyright, or anything that would break any law. Empty mods will be marked as incompatible and may be deleted or banned at any time.

By uploading content to the Unending Galaxy Steam Workshop, you agree to the terms of the Steam Subscriber Agreement.

It is developed mainly by Alexandra Frock (antigravities) in C#. 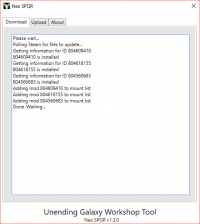 You can add and remove mods from the active list as needed.

Uploading a mod is simple. First, open the Workshop tool. Then, select your mod's folder, select the “Create new mod” option in the “Update mod” dropdown, complete the form, and hit the Upload button. Please note that your mod must have a modinfo.txt and a previewimage.png in order for it to be uploaded to Workshop. Click here for a GIF that shows the process. Mods that circumvent the rules stated above may be marked as incompatible, banned, or deleted at any time.

Follow the Uploading instructions, but in the “Update mod” dropdown, choose the mod that you would like to change.