This guide was aimed at the Beta 1. It's fairly outdated now but some parts are still indicative of the general gameplay as an empire. Screenshots ARE NOT representative of the current product.

This small tutorial is meant to help you with the management of your empire, especially on the war side of things. You will learn how to manage ship production, manually invade sectors and handle control groups. 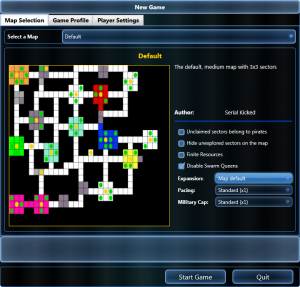 Start a new game and use the Default map. As you can see, you will start (you are in green on the map) near the Draths, the ISA and the AI Core territories. The AI Core will be our main opponent here. While on this screen, be sure to disable the Swarm Queens as they are a factor of randomness that could be detrimental to this tutorial. 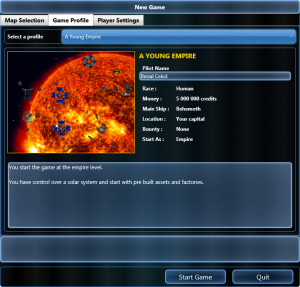 On the next tab, select the “A Young Empire” scenario. 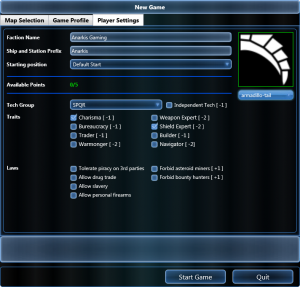 On the third tab, choose the “SPQR” tech group. Their ships tend to be tougher than those from the other tech groups, they are a bit more costly, though. Uncheck the “Independent Tech”, we don't need versatility, we need raw power. That leaves 3 points for your other traits. There's no right answer, but for the purpose of this tutorial, take the Shield Expertise and the Charisma traits. The first one will make your ship even tougher while the other should help keeping the Draths off your back while you are fighting the AI Core. 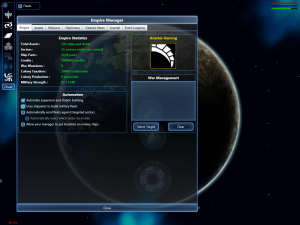 By default, your empire is automatically managed by the AI system. However, given your precarious position next to the most aggressive faction (AI Core), simply letting the game run will ensure your destruction. So, the first thing to do is to go in the Empire Manager and disable all the managers except Automate station building and expansion.

When done, your empire will still expand and build stations, but you'll be the one managing military production and handle the fleets.

Speaking of fleets, you start as a Battleship with several ships escorting you. First, order the constructor class ship to [H]alt so it can be taken over by the station building manager. Secondly switch your main ship to one of the frigate (E key by default when the said ship is selected). Finally, select the battleship and set it as the first control group with [Ctrl]+1.

Now, locate your shipyard and open its menu, we'll need some warships and fast. 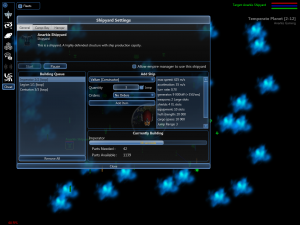 First rule of engagement is to know your enemy. AI Core ships only use lasers, they are long range, extremely accurate and relatively strong. Their hull is strong but their shield systems are quite bad. Given that their capital class lasers will basically insta-kill any fighter or frigate coming into range, we need beefy ships that can take a punch.

Check the loop option, we don't want to always come back to the shipyard. Order your built ships to join your first control group (the one you created a moment ago). Then, queue 2 battleships, 2 cruisers and 1 carrier. The shipyard will build them on repeat and reinforce your control group automatically.

Let's get a look at the map, shall we (F2). It should more or less look like this: 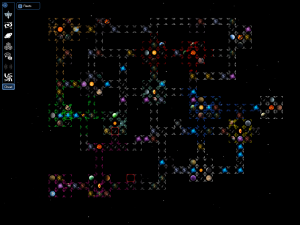 If your expansion is smaller than that wait until you are in contact with the Drath empire and have the isolated sun under your control. When it's done, move your fleet toward this location. To do so, open the galactic map (F2), select the first control group (1) and right click the sector with the isolated sun. When done, deselect the fleet so you don't give it another order by mistake (minus [-] on the keypad).

Meanwhile, it's important to check more or less regularly your relation with the Draths. To do so, open your empire manager, go to the diplomacy tab and double click their name. 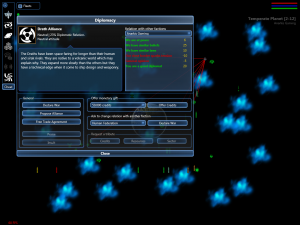 Check the relation panel on the right, there's a line you don't want to see, it's called We want one of your sectors. Normally, they go to war with the pirates first, but from time to time they may target you instead. If you see this line, give them the largest amount of tribute available as an option. Money isn't really a concern right now, and you don't want to fight a war on 2 fronts. As long as you are fighting the Core, you want them to like you (>=15% relation to be sure).

By now, two things should happen:

The AI Core should start taking over your territory, do not try to defend it right now, those sectors by themselves are worthless, and defending them would cause them to allocated even more ships against you instead of sending them against their other enemies. This star is where you'll start your counter attack from.

Also, a secondary shipyard should be built on the isolated sun (If not, wait for it). Same deal as with the first, queue up, add to your first control group, and loop 1 battleship and 2 cruisers.

After a while the map should look like this: 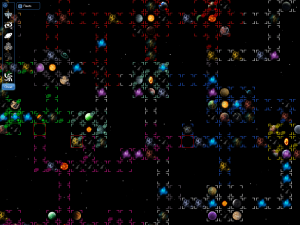 It's time to counter attack. First, send your control group to the sector being invaded below your star, and once it's there order it to patrol the location with the [p] key (you can use the [Shift] key to queue orders).

Open the empire manager, on the first tab, click Select War Target and choose the sector below it.

If your fleet's location is still empty from threats, send your fleet toward the sector you're invading and order it to kill everything either with the attack/move order (control + right click) or with the patrol order (p). Micromanaging isn't really necessary, but it can reduce your losses a bit. You can also hop into one of the ships and help out yourself, here again, it's not necessary (but it's fun). 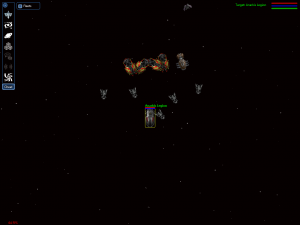 Rinse and repeat until you reach the other isolated star above the AI Core main territory. You shouldn't encounter a lot of resistance as they are stretched extremely thin and already waging wars against 2 or 3 other factions simultaneously. 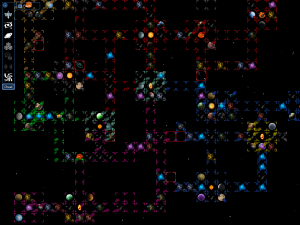 Depending on how the AI Core is doing on the other fronts, things may be a little hairy in this sector. There's also a warpgate there so expect reinforcements from them too. That said, your shipyards' production should cover for the losses. From there, it's time to consolidate your territory a bit.

Your shipyards have been building fleets only for your control group until now, so you basically have no automated defenses and attack ships ready in case of an emergency. It's time to change that. Open one of your shipyards' menu, and clear its building queue, also be sure that “allow the manager to use this shipyard” option is checked. Open the Empire Manager, and re-enable Use shipyards to build military fleet. It will ensure that automated military ships will patrol your territory and deal with intruders.

From there, you can either head down toward their main systems, it will be more heavily defended and dangerous especially if they got time to regroup. On the other hand, if you manage to take their 2 systems you'll have eliminated a major threat and gained a sizable chunk of very valuable territory. The other option is to mop up the sectors they have conquered, it's much easier and open a path toward the territory of the other factions, which can be both a good and a bad thing.

I'd suggest to try going to the AI Core main systems. When you have a choice about which sector to invade, always go toward (or for) the capital of this system, because once it's taken you have both removed a ship production facility, and taken a warpgate, making travel more difficult for them and much easier for you.

Also, always keep an eye on your ship parts reserves, when it reach 50 or less, your ship production will be severely reduced. And compare your military strength to the AI Core regularly (information is in the Empire Manager). Sometimes it's better to wait a bit for more ships to be produced than to rush in with a bunch of badly damaged ones.

Once the AI Core military fleet is a joke compared to yours, you might as well put back on the 2 other managers (automatically send fleets and select sectors to invade). Note that ships in your first control group won't join automated operations. To change that, empty this control group (select nothing and press Ctrl+1) and then you can add ships individually to the automated military forces by opening their Ship Setup Menu and checking the Allow Defense Grid to borrow this ship option. Damaged ships removed from the control group and added to the defense grid will seek repairs automatically after a little while.

Once you are done with the AI Core, the most logical step would be to attack the Drath empire so you could control the whole west of the map. However, be sure you have enough forces to do so. Also, be wary when going to war against other factions. Contrary to the AI Core, they may form alliances or bribe others into declaring war on you. Checking the diplomatic relations between the various factions is an important part of the game, especially before going to war.

If the Draths are too strong for you, the ISA territory that probably has already been partially taken over by the AI core and/or other factions is a much easier pick.