When a ship gets destroyed by another one, its owner (faction) may decide to put a bounty on the head of the offender. However pirate and unclaimed sectors are considered unsafe, and no bounty can be put on someone there. Value of the bounty varies according to the gravity of the infraction. If you destroy a ship with a bounty on its head, you will get the reward. One exception to this rule: factions you are at war with won't pay you anything. You can see how much you've received when you scored a kill in your journal (Empire Manager → Journal).

You can see what ships have a bounty by selecting them, and you can check how big the bounty is by using the interact key [E] to talk with the pilot. 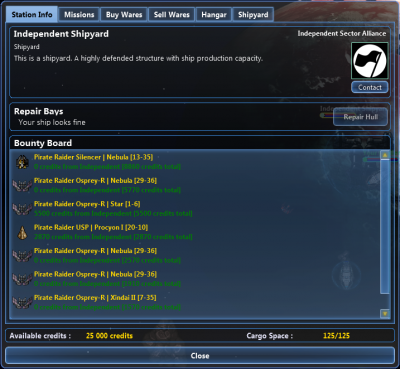 You access the bounty board for each faction at their respective shipyards. The board displays the biggest bounties currently available. You can double click an item in the list to add it to your mission tracker.

Paying you own bounty

You can clear the bounty on your own ships in a number of ways. The simplest method is to open the ship's setup menu and use the appropriate button to wire a credit transfer, it won't do you any good if your ship is already under attack by the police or the bounty hunter, though.

You can also open communication with any station to clear the bounty on the ship you're currently flying.

You can also talk to police pilots to the same effect, however you may need to clear the location for the heat to dissipate.

And last, but not least, if you are in good terms with the pirates, you may want to head toward a pirate base. From there you can ask them to hack the bounty database. This action costs less credits than paying the bounty in full, and if your reputation is high enough, you'll be able to pay with influence points instead of credits.

Most factions, except the Pirates and the AI Core, will spawn bounty hunters. Those ships will roam the galaxy looking for other pilots with a bounty on their head. If you play as a pirate, expect to be hunted down by bounty hunters if you let your bounty grow too large. They aren't a friendly bunch.

Police forces will also target you if you have a bounty from the faction they belong to. Contrary to bounty hunters, it is possible to ask the police to stop attacking you by talking with their pilots. You will, of course, need to pay the fine.